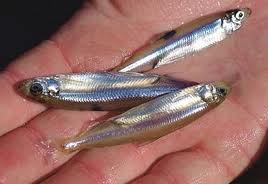 The Central Valley Project and the State Water Project “are perhaps the two largest and most important water projects in the United States. These combined water projects supply water originating in northern California to more than 20,000,000 agricultural and domestic consumers in central and southern California.” The source of the water is the lone habitat for the delta smelt, a threatened species under the Endangered Species Act [16 U.S.C. § 1531]. The United States Fish and Wildlife Service [FWS] prepared a report concluding that continued operations on these projects would jeopardize the smelt. Various water districts and agricultural consumers brought an action against various federal defendants to prevent them from acting on the FWS opinion. The district court invalidated the FWS opinion. The Ninth Circuit reversed, stating: “As the Supreme Court observed in Tennessee Valley Authority v. Hill (1978) 437 U.S. 153, [98 S.Ct. 2279, 57 L.Ed.2d 117]: ‘It may seem curious to some that the survival of a relatively small number of three-inch fish … would require the permanent halting of a virtually completed dam,’ but ‘the explicit provisions of the Endangered Species Act require precisely that result.’ Such species have been ‘afforded the highest of priorities,’ by Congress, even if it means ‘the sacrifice of the anticipated benefits of the project and of many millions of dollars in public funds.’ The law prohibits us from making ‘such fine utilitarian calculations’ to balance the smelt’s interests against the interests of the citizens of California.” (San Luis & Delta-Mendota Water Authority v. Jewell  (Ninth Cir.; March 13, 2014) (Case No’s. 11-15871, 11-16617, 11-16621, 11-16623, 11-16624, 11-16660).)

Short sales have become a popular alternative for people struggling to keep up with their mortgage payments. But what is a short sale, and do you qualify? What is a Short Sale? A short sale is a sale of real estate in which the proceeds from the sale are insufficient to cover … END_OF_DOCUMENT_TOKEN_TO_BE_REPLACED

We often associate going to see an attorney with legal problems, but an attorney can help you in many different aspects of business. Whether you are just starting your business or have been in business for many years, an experienced business attorney can be an asset, providing … END_OF_DOCUMENT_TOKEN_TO_BE_REPLACED