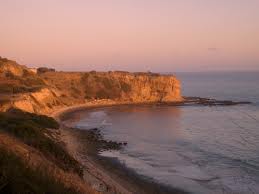 In 1956, road construction by Los Angeles County in a then unincorporated area of the Palos Verdes Hills known as Portugese Bend accidentally reactivated a sub-surface prehistoric slide area. That incident sent just under one square mile of hillside property on an ongoing, slow-motion, downhill journey that inexorably leads to a bluff overlooking the Pacific Ocean. As a result, homes built in the area have moved along with the land, in some cases outside their original lot lines and on to neighboring parcels. Homeowners in the area have turned to innovative methods of anchoring their homes in place even as the landslide moves down the hill. Some landowners in the affected area have also accommodated each other over the years by treating the earth movements as a de facto readjustment of their respective property lines. The City of Rancho Palos Verdes incorporated in 1972 and includes the Portugese Bend area. The City then acquired title to the right of way for Palos Verdes Drive South, which cuts through the landslide area. In 1987, the City took title to a piece of land (Lot 1) in the slide area that sits directly south of the roadway of Palos Verdes Drive. Sometime between 1956 and 1987, two homes that were originally located north of the roadway on Lots 40 and 41 migrated approximately 300 feet south of the roadway and on to Lot 1. Those homes are now located at 40 and 41 Cherryhill Lane. In 2000, plaintiff purchased one of those homes and later brought an action to quiet title. The trial court entered summary judgment in favor of the City, and the appellate court affirmed, concluding the Cullen Earthquake Act [Civil Code section 751.50] “does not apply to lot line displacements resulting from ongoing and gradual earth movements.” (Joannou v. City of Rancho Palos Verdes  (Cal. App. Second Dist., Div. 8; September 12, 2013) 219 Cal.App.4th 746.

For years you diligently save up to buy your first house. After months of searching through listings, you finally find your dream home and make an offer that gets accepted. Just days before closing, everything goes smoothly until you get an email from your "real estate agent" … END_OF_DOCUMENT_TOKEN_TO_BE_REPLACED

According to the Bureau of Transportation, around 13 car crashes occur every minute in the U.S. When an accident happens it's important to know what steps to take and how to protect your rights. The most important step you can take is to hire a qualified car accident attorney … END_OF_DOCUMENT_TOKEN_TO_BE_REPLACED