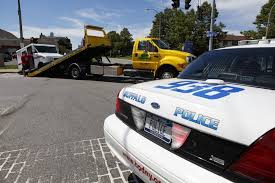 A police department solicited bid proposals for its official police towing and storage. A towing company who did not get the bid brought an action against the city and three city council members, claiming the city council members had a conflict of interest and should not have voted on the bid. The trial court granted summary judgment in favor of defendants.  In affirming, the appellate court pointed out the dearth of any facts or argument plaintiff had in its opposition to the motion, noting, “According to [the towing company], it simply ‘needs to go through the discovery process in order to get that proof.’” With regard to plaintiff’s cause of action against the city council members for violation of the Political Reform Act of 1974 [Government Code section 81000], the appellate court stated: “[A]s a matter of law the $250 or more in campaign contributions [the council members] received in an earlier election cycle do not create a conflict of interest.”  (All Towing Services LLC v. City of Orange (Cal. App. Fourth Dist., Div. 3; October 22, 2013) 220 Cal.App.4th 946, [163 Cal.Rptr.3d 626].

Mark A. Mellor, Esq. was featured on ABC 10News San Diego, where several homeowners claim that a well-known solar company suddenly closed their doors and took off with their payments. "Attorney Mark Mellor specializes in construction law. He tells homeowners to check all … END_OF_DOCUMENT_TOKEN_TO_BE_REPLACED

In nearly any kind of enterprise, a business attorney is critically important in making sure that business transactions are conducted in appropriate ways. In general, business attorneys help their clients with everything involved in operationally running a business – from payroll … END_OF_DOCUMENT_TOKEN_TO_BE_REPLACED