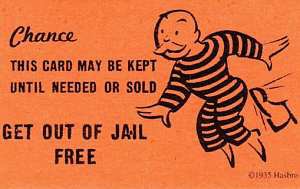 Plaintiff was arrested on a warrant for another man who had a similar name. Plaintiff tried to convince everyone involved they arrested the wrong man, pointing out his driver’s license, social security number, booking photo and fingerprints were all different from the man they wanted. Nonetheless, plaintiff was incarcerated for nine days, and was sodomized by another inmate during those nine days. Upon his release, plaintiff sued many in authority, including the deputy district attorney who he alleges failed to determine his true identity and tried to block his release. The trial court sustained the deputy district attorney’s demurrer, and the Court of Appeal affirmed, stating: “We hold that [plaintiff] adequately alleged [the deputy D.A.] was liable for false imprisonment; we will also hold that statutory prosecutorial immunity [Government Code section 821.6] did not apply to the false imprisonment claim. However, the demurrer had to be sustained based on common-law prosecutorial immunity.”  (Bocanegra v. Jakubowski (Cal. App. Fourth Dist., Div. 2; October 27, 2015) 241 Cal.App.4th 848 [194 Cal.Rptr.3d 327].)

Mark A. Mellor, Esq. was featured on ABC 10News San Diego, where several homeowners claim that a well-known solar company suddenly closed their doors and took off with their payments. "Attorney Mark Mellor specializes in construction law. He tells homeowners to check all … END_OF_DOCUMENT_TOKEN_TO_BE_REPLACED

In nearly any kind of enterprise, a business attorney is critically important in making sure that business transactions are conducted in appropriate ways. In general, business attorneys help their clients with everything involved in operationally running a business – from payroll … END_OF_DOCUMENT_TOKEN_TO_BE_REPLACED