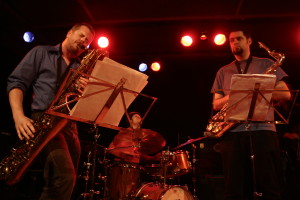 A professional musician who was injured after he fell from a stage at a country club brought an action against the club for negligence. The stage, owned by the club and put together by the club on the day of the performance, consisted of four rows, known as risers, each approximately two feet high and three to four feet wide. To fit the stage into a corner, each row was narrower than the last, leaving triangular gaps at the end of each row between the walls and the risers. The musician came to the club during the late afternoon to set up for the evening performance.  The lights were off, and he had to depend on natural light from the windows. He fell into one of the gaps and was seriously injured. The club brought a motion for summary judgment, contending it owed no duty to the musician and that the man regularly performed on stage and assumed the risk of falling. The trial court found the doctrine of primary assumption of the risk applied and granted summary judgment to the club. Although it agreed with the club that falling off the stage is an inherent risk for all stage performers, the appellate court reversed, finding there is a triable issue of fact whether the club constructed the stage in a way that unreasonably increased the risk of falling. (Fazio v. Fairbanks Ranch Country Club (Cal. App. Fourth Dist., Div. 1; January 29, 2015) 233 Cal.App.4th 1053 [183 Cal.Rptr.3d 566].)

Getting in a car crash can be detrimental to your physical and mental well-being. To compensate for stress, injuries, and damage to your vehicle, you should ensure that you get the compensation you deserve. An experienced personal injury lawyer can help you with that. Reasons … END_OF_DOCUMENT_TOKEN_TO_BE_REPLACED

Rental agreements must be upheld by both the landlord and the tenant. If the landlord or rental company violates the agreement, it may be grounds for legal action by the tenant. In most cases, a tenant will sue their landlord after moving out, but a tenant can also sue while they … END_OF_DOCUMENT_TOKEN_TO_BE_REPLACED

Even if you have carefully planned your budget, income, and expenses down to the last cent, things don’t always go the way you expect them to. Life might get in the way and ruin your plans—and a bad investment, medical emergency, natural disaster, or other catastrophe can … END_OF_DOCUMENT_TOKEN_TO_BE_REPLACED