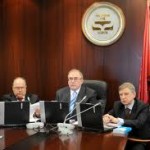 One party to an arbitration petitioned to the superior court to confirm the award of the arbitrator. The other party objected because the parties did not agree in their arbitration agreement that the award could be judicially confirmed as required by section 9 of the Federal Arbitration Act [FAA; 9 U.S.C. § 9.]. The trial court confirmed the award, and the Court of Appeal affirmed, stating, “section 9 of the FAA is procedural, not substantive, and therefore does not apply in state court proceedings.” Swissmex-Rapid S.A. de C.V. v. SP Systems, LLC  (Cal. App. Second Dist., Div. 3; December 28, 2012) (As Mod. January 4, 2013) 212 Cal.App.4th 539.

Mark A. Mellor, Esq. was featured on ABC 10News San Diego, where several homeowners claim that a well-known solar company suddenly closed their doors and took off with their payments. "Attorney Mark Mellor specializes in construction law. He tells homeowners to check all … END_OF_DOCUMENT_TOKEN_TO_BE_REPLACED

In nearly any kind of enterprise, a business attorney is critically important in making sure that business transactions are conducted in appropriate ways. In general, business attorneys help their clients with everything involved in operationally running a business – from payroll … END_OF_DOCUMENT_TOKEN_TO_BE_REPLACED