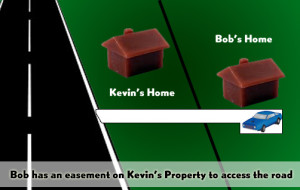 An easement for ingress and egress across property was granted in 1942. More than 60 years later, plaintiff began improvements to the easement to gain easier access to plaintiff’s property, and defendant complained about the work being done on his property. A stop-work order was issued and plaintiff’s permit was revoked. Defendant refused to sign an agreement to permit plaintiff to continue construction; plaintiff’s houses were in the framing stage, with exposed wood and no roof and so they posed a fire hazard. Plaintiff filed an action seeking damages for interference with her easement and for injunctive relief. At trial, plaintiff adduced evidence that defendants committed the following four specific acts that she believed constituted interference with her use and enjoyment of the easement: [Defendant’s] (1) refusal to sign the covenant for community driveway; (2) refusal to sign a retaining wall permit which was a prerequisite to plaintiff’s occupancy certificate; (3) demands for money in exchange for granting plaintiff’s rights she already possessed in the easement; and (4) statements that plaintiff lost her easement by creating the grading cut and burdening the easement. The jury found that defendants substantially and unreasonably interfered with plaintiff’s use and enjoyment of her easement by acting or failing to act, and next that defendants breached the implied covenant of good faith and fair dealing contained in the easement’s running covenant. The trial court entered judgment for plaintiff in the amount of $713,927.96, but ordered her to remove a portion of a retaining wall, and permanently enjoined defendant from interfering with plaintiff’s use of the easement. On appeal, the appellate court affirmed the judgment, stating the “conduct can constitute actionable interference with the use and enjoyment of an easement even when the conduct does not physically obstruct the servitude.” (Dolnikov v. Ekizian  (Cal. App. Second Dist., Div. 3; December 19, 2013) 222 Cal.App.4th 419, [165 Cal.Rptr.3d 658].)

Short sales have become a popular alternative for people struggling to keep up with their mortgage payments. But what is a short sale, and do you qualify? What is a Short Sale? A short sale is a sale of real estate in which the proceeds from the sale are insufficient to cover … END_OF_DOCUMENT_TOKEN_TO_BE_REPLACED

We often associate going to see an attorney with legal problems, but an attorney can help you in many different aspects of business. Whether you are just starting your business or have been in business for many years, an experienced business attorney can be an asset, providing … END_OF_DOCUMENT_TOKEN_TO_BE_REPLACED