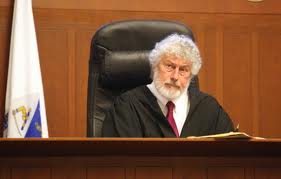 Shortly after a hearing, an administrative law judge [ALJ] was contacted by an FBI agent who said the claimant was faking his physical injuries.  The ALJ disclosed the ex-parte contact to claimant’s lawyer, who objected to any weight being given to the information unless there was a supplementary hearing wherein the FBI agent could be cross-examined.  The ALJ’s decision was that the claimant “was exaggerating symptoms,” and notes the FBI agent told the ALJ he saw the claimant in the parking lot “with a normal gait and station and subsequently observed the claimant walking with an exaggerated limp once inside the Federal Courthouse.”  The district court affirmed the ALJ’s decision.  The Ninth Circuit found:  “Receipt of the ex-parte communication, assignment of some weight to it, and denial of a supplementary hearing to address it, was error.”  But the court found the judicial error was harmless and affirmed the lower court’s decision.  Lidwig v. Astrue  (Ninth Cir. June 1, 2012) (Case No. 10-35946) 681 F.3d 1047.

Are you in the process of buying or selling a home? If so, then you may need to hire a real estate lawyer. While there are many lawyers who practice real estate law, not all of them are created equal. You need to find one that has the experience and qualifications that you … END_OF_DOCUMENT_TOKEN_TO_BE_REPLACED

Debt is a stressful thing affecting many Americans. Some are choosing to file for bankruptcy to take action against their debt. Bankruptcy can be a complex and confusing process, so in this blog, we will break down the finer details so that you can make the best decision for … END_OF_DOCUMENT_TOKEN_TO_BE_REPLACED

If you are a business owner, then you know that contracts are an important part of doing business. Contracts set the parameters for a deal and protect both parties involved. Unfortunately, contract disputes can happen. If you think you might be dealing with a breach of contract, … END_OF_DOCUMENT_TOKEN_TO_BE_REPLACED