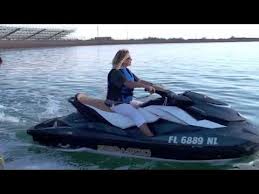 When a teenage girl and her older sister, wearing only their two-piece bathing suits, boarded a personal watercraft [PWC], they were given no instructions of any kind, safety or otherwise. Printed on a label located under the handlebars on the console of the PWC was: “WARNING. . . severe injuries to body cavities can occur as a result of falling into water or being near [the] jet thrust nozzle;” and provided that “[n]ormal swimwear does not adequately protect against forceful water entry into lower body opening(s) of males or females,” and, thus, “[a]ll riders must wear a wet suit bottom or clothing that provides equivalent protection.” One girl sustained serious and permanent injuries to her rectum and the other to her vagina when they fell off the back of the three-passenger craft and their flesh was ripped. During trial, an expert testified the warning was inadequate because plaintiffs could not see it, as the operator was already seated when the girls came onboard. The expert also stated a warning about the danger of the powerful jet nozzle should have been clear and visible to anyone getting on board. The two girls testified they would have heeded a warning had they seen it; that is, they would have either declined to take the ride or would have gotten wet suits before they did. A jury found the owner of the PWC, its operator, a store employee and the manufacturer liable for negligence for a Failure To Warn. One girl was awarded $3.385 and the other $1.063 million in compensatory damages. The jury also awarded each $1.5 million in punitive damages against the manufacturer, finding its conduct manifested a reckless or callous disregard for plaintiffs’ rights and safety. In affirming the compensatory award, the appellate court concluded there was substantial evidence the warning to passengers was inadequate, “thus making the PWC defective in design, and that this design defect was a substantial factor in causing plaintiffs’ harm.” In affirming the punitive damages award, the appellate court said an award of punitive damages under federal maritime law requires only a preponderance of evidence and may be based on mere reckless conduct or gross negligence. (Colombo v. BRP US Inc. (Cal. App. Fourth Dist., Div. 1; October 30, 2014) 230 Cal.App.4th 1442 [179 Cal.Rptr.3d 580].)

Getting in a car crash can be detrimental to your physical and mental well-being. To compensate for stress, injuries, and damage to your vehicle, you should ensure that you get the compensation you deserve. An experienced personal injury lawyer can help you with that. Reasons … END_OF_DOCUMENT_TOKEN_TO_BE_REPLACED

Rental agreements must be upheld by both the landlord and the tenant. If the landlord or rental company violates the agreement, it may be grounds for legal action by the tenant. In most cases, a tenant will sue their landlord after moving out, but a tenant can also sue while they … END_OF_DOCUMENT_TOKEN_TO_BE_REPLACED

Even if you have carefully planned your budget, income, and expenses down to the last cent, things don’t always go the way you expect them to. Life might get in the way and ruin your plans—and a bad investment, medical emergency, natural disaster, or other catastrophe can … END_OF_DOCUMENT_TOKEN_TO_BE_REPLACED