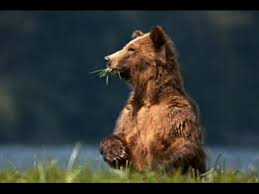 Between 1800 and 1975, grizzly bear populations fell from estimates of over 50,000 to less than 1,000. In Yellowstone National Park, government helicopters regularly fly over a habitat shared by grizzly bears and bison, for the purpose of preventing bison from contaminating cattle with a disease carried by bison. Concerned about the untoward albeit unintended adverse effect the helicopter flights have on grizzly bears, an environmental group filed an action against the federal government under the Endangered Species Act of 1973 [16 U.S.C. § 1531; ESA]. The federal trial court dismissed the action, granting the government’s motion for summary judgment. The Ninth Circuit Court of Appeals largely affirmed the order of dismissal, stating: “[The environmental group] alleges that ‘helicopter . . . operations . . .displace grizzly bears, including female bears, from critical spring and summer feeding activities.’ Included in the record is a video [the environmental group] obtained of a ‘bisonhazing helicopter operation’ which purportedly depicts a ‘grizzly bear running away from the helicopter’ on May 12, 2010.  The videographer, however, does not state and the district court could not conclude that ‘the bear was engaged in any feeding activity, whether before, during, or after its contact with the helicopter.’”  (Alliance for the Wild Rockies v. United States Dep’t of Agric. (Ninth Cir.; November 20, 2014) 772 F.3d 592.)

Short sales have become a popular alternative for people struggling to keep up with their mortgage payments. But what is a short sale, and do you qualify? What is a Short Sale? A short sale is a sale of real estate in which the proceeds from the sale are insufficient to cover … END_OF_DOCUMENT_TOKEN_TO_BE_REPLACED

We often associate going to see an attorney with legal problems, but an attorney can help you in many different aspects of business. Whether you are just starting your business or have been in business for many years, an experienced business attorney can be an asset, providing … END_OF_DOCUMENT_TOKEN_TO_BE_REPLACED