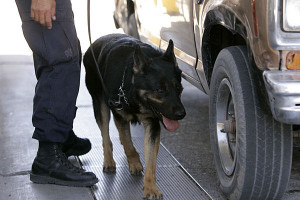 In Illinois v. Caballes (2005) 543 U.S. 405, [125 S.Ct. 834, 160 L.Ed.2d 842], a state trooper stopped a man for speeding. A drug officer heard about the stop over the police radio and went to the location with a drug-sniffing dog. While the man sat in the trooper’s car as the trooper wrote out a warning ticket, the drug officer walked the dog around the man’s car. The dog alerted to drugs in the car, and the man was arrested, convicted and sentenced to prison. The whole episode lasted less than 10 minutes. The United States Supreme Court noted the Fourth Amendment guards against unreasonable searches and seizures, but that this stop was lawful and not prolonged, so there was no unreasonable search or seizure. In the present Nebraska case, a man was lawfully stopped by a police officer just after midnight. By 12:28, the officer had finished explaining the warning ticket and had given back the driver’s and the passenger’s documents. At that point, the officer asked permission to walk his dog around the car, and the driver said, “no.” The officer ordered him out of his car, went to the patrol car for the dog and led the dog twice around the car. The second time around, the dog alerted to drugs in the car, and the man was arrested and charged. The United States Supreme Court stated a seizure justified only by a police-observed traffic violation becomes unlawful if it is prolonged beyond the time reasonably required to complete the mission of issuing a ticket for the violation. The high court sent the case back to the lower court to decide whether or not there was reasonable suspicion of criminal activity which justified detaining the driver beyond completion of the traffic infraction violation. (Rodriguez v. United States (U.S. Sup. Ct.; April 21, 2015) ___U.S.___ [135 S.Ct. 1609, 191 L.Ed.2d 492].) http://www.supremecourt.gov/opinions/14pdf/13-9972_p8k0.pdf

For years you diligently save up to buy your first house. After months of searching through listings, you finally find your dream home and make an offer that gets accepted. Just days before closing, everything goes smoothly until you get an email from your "real estate agent" … END_OF_DOCUMENT_TOKEN_TO_BE_REPLACED

According to the Bureau of Transportation, around 13 car crashes occur every minute in the U.S. When an accident happens it's important to know what steps to take and how to protect your rights. The most important step you can take is to hire a qualified car accident attorney … END_OF_DOCUMENT_TOKEN_TO_BE_REPLACED