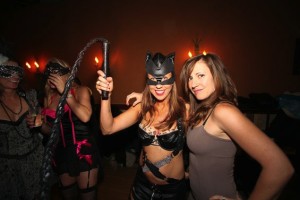 More than a dozen Halloween partygoers were swept up and detained by a Sheriff’s SWAT team for up to 14 hours. The party, an annual event with hundreds of costumed attendees, had drawn neighbor complaints over the years. Based on a flyer that advertised a “Casino Room,” at the party, the Sheriff’s department obtained a search warrant to look for evidence of illegal gambling at the party. The search yielded two slot machines and three grams of marijuana in an attendee’s purse. Citing 42 U.S.C. § 1983, the partygoers sued the department and some officers for violation of their civil rights “to be free from unlawful seizure by prolonging their detention beyond the conclusion of the search of the residence.” By the time of trial, there was only one defendant, an officer; the court granted a directed verdict in that officer’s favor after a six-week trial. The appellate court reversed as to plaintiffs’ claims alleging prolonged detention under § 1983 and affirmed in all other respects. (Guillory v. Hill (Cal. App. Fourth Dist., Div. 3; January 16, 2015) 233 Cal.App.4th 240, [182 Cal.Rptr.3d 513].)

For years you diligently save up to buy your first house. After months of searching through listings, you finally find your dream home and make an offer that gets accepted. Just days before closing, everything goes smoothly until you get an email from your "real estate agent" … END_OF_DOCUMENT_TOKEN_TO_BE_REPLACED

According to the Bureau of Transportation, around 13 car crashes occur every minute in the U.S. When an accident happens it's important to know what steps to take and how to protect your rights. The most important step you can take is to hire a qualified car accident attorney … END_OF_DOCUMENT_TOKEN_TO_BE_REPLACED