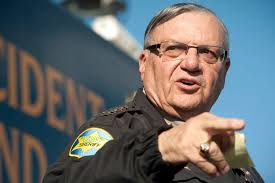 The background involves allegations the Maricopa County, Arizona Sheriff Joseph M. Arpaio’s police force has a custom, policy and practice of racially profiling Latino drivers and passengers, and of stopping them pretextually under the auspices of enforcing federal and state immigration-related laws, resulting in longer and more burdensome detentions for Latinos than for non-Latinos in violation of federal laws. The federal trial judge concluded defendants employed an unconstitutional policy of considering race as a factor in determining where to conduct patrol operations, in deciding whom to stop and investigate for civil immigration violations, and in prolonging the detentions of Latinos while their immigration status was confirmed. As a result, the trial court permanently enjoined defendants from conducting these procedures. On appeal, defendants argued the injunction was overbroad in such areas as ordering the racial profile training of police officers, corrective supervision procedures for constitutional violations and requiring video-recording of traffic stops. To the extent the injunction addressed constitutional violations, the Ninth Circuit Court of Appeals affirmed the trial court’s orders, but drew the line and reversed with regard to the injunction’s requirement those monitoring compliance take into account misconduct complaints about officers, stating, “if an officer commits spousal abuse, or clocks in late to work, or faces a charge of driving under the influence,” such actions may be violations of some rules or laws, but they do not involve constitutional issues. Thus, the injunction was affirmed in part and reversed in part. (Melendres v. Arpaio (Ninth Cir.; April 15, 2015) 784 F.3d 1254.)

For years you diligently save up to buy your first house. After months of searching through listings, you finally find your dream home and make an offer that gets accepted. Just days before closing, everything goes smoothly until you get an email from your "real estate agent" … END_OF_DOCUMENT_TOKEN_TO_BE_REPLACED

According to the Bureau of Transportation, around 13 car crashes occur every minute in the U.S. When an accident happens it's important to know what steps to take and how to protect your rights. The most important step you can take is to hire a qualified car accident attorney … END_OF_DOCUMENT_TOKEN_TO_BE_REPLACED