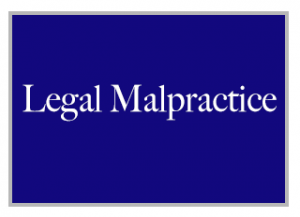 Plaintiff hired a lawyer to represent her in litigation. After settlement, plaintiff sought a refund of unearned attorney fees she had advanced as the lawyer had written her a letter stating she had a credit balance of $46,321.85 and the invoice so reflected. When the refund was not forthcoming, she hired another lawyer to try to get the refund. More than a year later, the second lawyer filed an action against the first lawyer for the refund. Under the legal malpractice statute of limitations found in Code of Civil Procedure section 340.6, the trial court sustained a demurrer and dismissed the action. In reversing, the appellate court stated:  “But surely it cannot be the case that every conceivable act an attorney may take that affects his or her client is one arising in the performance of legal services. For example, if a client leaves her purse unattended in the attorney’s office and the attorney takes money from it, would we say that act arose in the performance of legal services? How different is it if, when the legal services have been completed and the attorney’s representation has been terminated, the attorney keeps the unearned fees belonging to the client?” Pointing out the case was at the demurrer stage, the appellate court continued: “Here, the facts alleged in [plaintiff’s] second amended complaint could be construed as giving rise to a cause of action for the theft or conversion of an identifiable sum of money belonging to her. This being the case, we cannot say [the pleading] demonstrates clearly and affirmatively on its face that her action is necessarily barred by the section 340.6 statute of limitations.” (Lee v. Hanley, July 15, 2014) (Lee v. Hanley (2014) 227 Cal.App.4th 1295 [174 Cal.Rptr.3d 489].) — SUPERSEDED BY GRANT OF REVIEW   The Current Decision: The California Supreme Court affirmed the Court of Appeal’s opinion, stating: “[W]e conclude that section 340.6(a)‘s time bar applies to claims whose merits necessarily depend on proof that an attorney violated a professional obligation in the course of providing professional services. . . . as the Court of Appeal observed, section 340.6(a) does not bar a claim for wrongdoing — for example, garden-variety theft — that does not require proof that the attorney has violated a professional obligation, even if the theft occurs while the attorney and the victim are discussing the victim‘s legal affairs. Section 340.6(a) also does not bar a claim arising from an attorney‘s performance of services that are not ‘professional services,’ meaning ‘services performed by an attorney which can be judged against the skill, prudence and diligence commonly possessed by other attorneys.’” The Supreme Court cautioned: “We do not suggest that [the lawyer] is in fact liable for conversion. At this stage, we do not know whether [the lawyer] disputes that he owes [the client] the money she claims (perhaps they had previously agreed that [the lawyer] could keep any leftover portion of the advance), whether [the lawyer] made a bookkeeping error in handling [the client’s] money, or whether [the lawyer] misspent [the client’s] money or decided to keep it for no good reason. If, for example, [the client’s] claim turns out to hinge on proof that [the lawyer] kept her money pursuant to an unconscionable fee agreement (Cal. Rules of Prof. Conduct, rule 4-200) or that [the lawyer] did not properly preserve client funds (Cal. Rules of Prof. Conduct, rule 4-100), her claim may be barred by section 340.6(a). At this stage, however, without any development of the facts, we cannot conclude that section 340.6(a) necessarily bars [the client’s] claim.”  (Lee v. Hanley (Cal. Sup. Ct.; August 20, 2015) 61 Cal.4th 1225 [191 Cal.Rptr.3d 536, 354 P.3d 334].)

If you are a business owner, then you know that contracts are an important part of doing business. Contracts set the parameters for a deal and protect both parties involved. Unfortunately, contract disputes can happen. If you think you might be dealing with a breach of contract, … END_OF_DOCUMENT_TOKEN_TO_BE_REPLACED

If you're in the market for a property ownership attorney, it's important to know what to look for. Not all attorneys are created equal, and you'll want to make sure you choose one who is experienced, educated, reputable and responsive.  In this blog post, we will go over five … END_OF_DOCUMENT_TOKEN_TO_BE_REPLACED

When you’ve lost someone close to you, the last thing you may want to think about is filing a lawsuit. However, in some cases, wrongful death suits can be the best way to get justice for your loved one and ensure that the responsible party is held accountable. What is a … END_OF_DOCUMENT_TOKEN_TO_BE_REPLACED