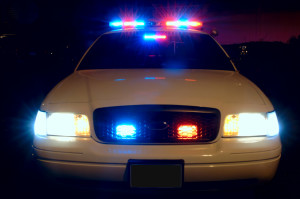 A Sheriff’s department received an emergency 911 call, reporting some people were fighting in an alley behind his home. The caller said he could hear screaming and one person had said, “the gun was loaded.” The caller stayed on the line, and shortly thereafter confirmed a squad car had arrived. As an officer drove along the alley, he saw a car coming toward him and away from the fight. The officer yelled: “Hey. Did you see a fight?” The other driver ignored the officer and kept driving. The officer turned around and found the car had parked on the street, a few houses down from where the fight was. The officer pulled behind the car and activated the emergency overhead lights of the patrol car. The driver identified himself and produced a driver’s license. He had watery, bloodshot eyes and smelled of alcohol. The driver was charged with felony driving under the influence, and pled guilty to driving with a blood alcohol over .08 percent. He later moved to suppress evidence of his physical condition, statements, and breath test results as the fruits of an unlawful detention. In affirming the conviction, the California Supreme Court found the driver was detained when the emergency lights were activated, and, unless the encounter was consensual, it had to be justified under the Fourth Amendment. The high court found there was such justification since the officer had a reasonable suspicion the driver had been involved in the fighting/loaded gun situation reported by the neighbor in the 911 call.  (People v. Brown (Cal. Sup. Ct.; August 6, 2015) 61 Cal.4th 968 [190 Cal.Rptr.3d 583, 353 P.3d 305].)

Are you in the process of buying or selling a home? If so, then you may need to hire a real estate lawyer. While there are many lawyers who practice real estate law, not all of them are created equal. You need to find one that has the experience and qualifications that you … END_OF_DOCUMENT_TOKEN_TO_BE_REPLACED

Debt is a stressful thing affecting many Americans. Some are choosing to file for bankruptcy to take action against their debt. Bankruptcy can be a complex and confusing process, so in this blog, we will break down the finer details so that you can make the best decision for … END_OF_DOCUMENT_TOKEN_TO_BE_REPLACED

If you are a business owner, then you know that contracts are an important part of doing business. Contracts set the parameters for a deal and protect both parties involved. Unfortunately, contract disputes can happen. If you think you might be dealing with a breach of contract, … END_OF_DOCUMENT_TOKEN_TO_BE_REPLACED