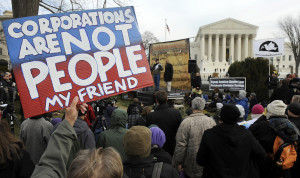 In Citizens United v. FEC (2010) 558 U.S. 310 [130 S.Ct. 876, 175 L.Ed.2d 753, 22 Fla. L. Weekly Fed. S. 73], (Citizens United), a divided United States Supreme Court invalidated federal election law restrictions on the political speech of corporations, holding that a speaker’s identity as a corporation, as opposed to natural person, could not justify greater regulation of speech than the First Amendment would have otherwise permitted. In 2014, the California Legislature sought to place on the general election ballot a nonbinding advisory question, Proposition 49. The measure would have asked the electorate whether Congress should propose, and the Legislature ratify, a federal constitutional amendment overturning the United States Supreme Court decision in Citizens United, supra, 558 U.S. 310 [130 S.Ct. 876, 175 L.Ed.2d 753, 22 Fla. L. Weekly Fed. S. 73]. Petitioners, a taxpayer’s organization, petitioned for a writ of mandate, urging the unconstitutionality of the Legislature’s action, and the California Supreme Court ordered the Secretary of State to refrain from placing Proposition 49 on the ballot. The California Supreme Court has now resolved the constitutionality of the proposition: “We conclude: (1) as a matter of state law, the Legislature has authority to conduct investigations by reasonable means to inform the exercise of its other powers; (2) among those other powers are the power to petition for national constitutional conventions, ratify federal constitutional amendments, and call on Congress and other states to exercise their own federal article V powers; (3) although neither constitutional text nor judicial precedent provide definitive answers to the question, long-standing historical practice among the states demonstrates a common understanding that legislatures may formally consult with and seek nonbinding input from their constituents on matters relevant to the federal constitutional amendment process; (4) nothing in the state Constitution prohibits the use of advisory questions to inform the Legislature’s exercise of its article V-related powers; and (5) applying deferential review, Proposition 49 is reasonably related to the exercise of those powers and thus constitutional. We deny the instant petition for a writ of mandate.” (Howard Jarvis Taxpayers Assn. v. Padilla (Cal. Sup. Ct.; January 4, 2016) 62 Cal.4th 486 [196 Cal.Rptr.3d 732, 363 P.3d 628].)

Litigation is a process that can be difficult to navigate, but it doesn't have to be. Insurance coverage litigation varies from case to case and depends on the specific situation of each plaintiff or defendant. There are many different types of insurance claims including medical … END_OF_DOCUMENT_TOKEN_TO_BE_REPLACED

Insurance defense attorneys are lawyers that specialize in defending those who have been wrongfully accused of insurance fraud. They help individuals and businesses with claims that involve a violation of the law or liability under an insurance policy. Insurance defense is a … END_OF_DOCUMENT_TOKEN_TO_BE_REPLACED

Do you feel like your legal case isn't being handled correctly? Are you worried that your legal matters aren't going to be taken seriously? Or maybe you just need someone who is qualified and experienced in taking care of what's important to you. If any of this sounds … END_OF_DOCUMENT_TOKEN_TO_BE_REPLACED