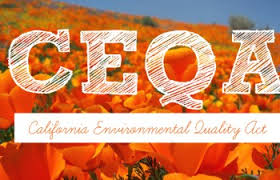 Apparently in an attempt to make the California Environmental Quality Act [CEQA; Public Resources Code section 21000 et seq.] less burdensome, the Legislature expressly exempted several categories of projects from CEQA review, projects which did not have a significant effect on the environment. Guidelines were written to implement the statute, and one of those exempted projects is single family homes.  Well, the planned single family home, involved in this case, is a 6,478-square-foot mansion with an attached 3,394-square-foot 10-car garage. Pursuant to the guidelines, a City approved the permit application to build the single-family home. The Court of Appeal invalidated the permit, relying on another guideline which provides: “A categorical exemption shall not be used where there is a reasonable possibility that the activity will have a significant effect on the environment due to unusual circumstances.” The California Supreme Court granted review and in reversing the Court of Appeal stated, “the Court of Appeal erred by holding that a potentially significant environmental effect itself constitutes an unusual circumstance. . .[t]he plain language of [the] Guidelines . . . requires that a potentially significant effect must be ‘due to unusual circumstance’ for the exception to apply. . . [t]his bifurcated approach to the questions of unusual circumstances and potentially significant effects comports with our construction of the unusual circumstances exception to require findings of both unusual circumstances and a potentially significant effect.”  The case was remanded for further proceedings.  In his concurring opinion, Justice Liu remarked: “It is unfortunate that today’s opinion, instead of simplifying the law in accordance with the CEQA statute and guidelines, adds further complexity to an area that many courts, practitioners, and citizens already find difficult to navigate.” (Berkeley Hillside Preservation v. City of Berkeley (Cal. Sup. Ct.; March 2, 2015) 60 Cal.4th 1086 [184 Cal.Rptr.3d 643, 343 P.3d 834].)

Litigation is a process that can be difficult to navigate, but it doesn't have to be. Insurance coverage litigation varies from case to case and depends on the specific situation of each plaintiff or defendant. There are many different types of insurance claims including medical … END_OF_DOCUMENT_TOKEN_TO_BE_REPLACED

Insurance defense attorneys are lawyers that specialize in defending those who have been wrongfully accused of insurance fraud. They help individuals and businesses with claims that involve a violation of the law or liability under an insurance policy. Insurance defense is a … END_OF_DOCUMENT_TOKEN_TO_BE_REPLACED

Do you feel like your legal case isn't being handled correctly? Are you worried that your legal matters aren't going to be taken seriously? Or maybe you just need someone who is qualified and experienced in taking care of what's important to you. If any of this sounds … END_OF_DOCUMENT_TOKEN_TO_BE_REPLACED