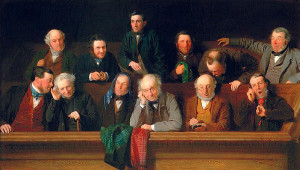 After a 12-member jury in a criminal trial had deliberated for more than a day and had received answers to five substantive questions, one jurors was excused for illness. Later the same day, the jury returned a guilty verdict. The defendant argued that under Federal Rules of Criminal Procedure, rule 23(b)(3), the court abused its discretion by proceeding with 11 jurors rather than seating an alternate. The Ninth Circuit affirmed defendant’s conviction, stating: “If the court had seated an alternate, it would have had to direct the jury to begin deliberations anew [], adding at least a day to the proceedings and imposing on the jurors the difficult task of discarding any conclusions they had already reached.” (United States v. Brown (Ninth Cir.; May 1, 2015) 784 F.3d 1301.)

We often associate going to see an attorney with legal problems, but an attorney can help you in many different aspects of business. Whether you are just starting your business or have been in business for many years, an experienced business attorney can be an asset, providing … END_OF_DOCUMENT_TOKEN_TO_BE_REPLACED

Did you know that on average, 95% of lawsuits are settled before they go to trial? With that statistic in mind, hiring a personal injury lawyer to handle your claim can ensure that you're getting the amount you deserve from your claim, regardless of the stage at which you're … END_OF_DOCUMENT_TOKEN_TO_BE_REPLACED

Landlord-tenant law can be complex, and it's a constantly evolving area of law. To ensure that both landlords and tenants are aware of their rights and responsibilities, it's important for them to understand the basics of landlord-tenant law in California. Having a Landlord or … END_OF_DOCUMENT_TOKEN_TO_BE_REPLACED