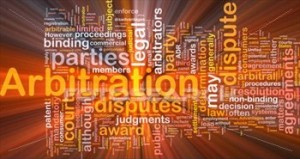 In a wrongful termination action, the trial court denied defendant’s  petition to compel arbitration because the agreement is procedurally and substantively unconscionable. On plaintiff’s first day of work, she was provided electronic access to the employer’s “onboarding system,” which included an arbitration agreement. Later the same day, plaintiff attempted to negotiate some of the terms because she said the agreement was too broad and did not include “several important terms.” The next day the general manager arranged a telephone conference call for plaintiff, the general manager and the human resources manager to discuss plaintiff’s concerns. During the call, plaintiff wanted to know who would pay for the arbitration and which firm would conduct it. The arbitration clause states in part: “I agree, as does the Company, to abide by the Company’s Dispute Resolution Policy (‘DRP’) and to arbitrate any dispute, claim, or controversy regarding or arising out of my employment (as defined by the Company’s DRP, a copy of which I may request at any time) that may arise between me and the Company, its parent, subsidiaries, affiliates or any other persons or entities acting as its agent.” In opposing the petition to compel arbitration, plaintiff submitted her own declaration which stated she was not given a copy of or access to the DRP. She further declared that during the conversation with the general manager and the human resources manager on her second day of employment, she requested a copy of the DRP to assist her in trying to negotiate an arbitration agreement to which she could agree, but the two managers told her they did not have a copy of it. Plaintiff also said she was told a copy of the DRP might be available at a later time, but if she did not sign the arbitration agreement as presented to her, it would be viewed as a refusal of the job offer, so she signed it. The Court of Appeal affirmed, stating “a high degree of procedural unconscionability accompanied the signing of the Agreement in this case,” the trial court’s findings that the agreement was one-sided, objectively unreasonable and lacked mutuality were supported by substantial evidence, and that substantive unconsionability permeated the entire agreement. (Carlson v. Home Team Pest Defense, Inc. (Cal. App. First Dist. Div. 4; August 17, 2015) 239 Cal.App.4th 619 [191 Cal.Rptr.3d 29].)

Many unfortunate circumstances can lead to someone not being financially stable. Finding yourself in an unstable financial situation while paying back loans can be especially difficult. While you may find your next steps elusive and overwhelming, there are some options. One … END_OF_DOCUMENT_TOKEN_TO_BE_REPLACED

A contract is a written agreement to help define the relationship between a business and an individual. Disputes can occur when one party breaches the terms of the contract, or if there is a disagreement regarding how it is worded.  Disputes with company contracts, non-compete … END_OF_DOCUMENT_TOKEN_TO_BE_REPLACED

Defective construction is a deficiency in a building or other structure type. Construction defects can delay projects and cause extensive injuries. Instances of defective construction occur because of poor design, low-quality materials, and poor workmanship. If you believe you … END_OF_DOCUMENT_TOKEN_TO_BE_REPLACED