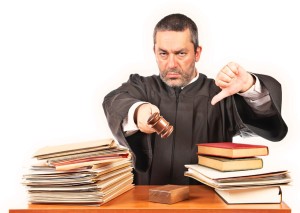 In a breach of contract/breach of fiduciary duty/elder abuse action, a lawyer representing himself threatened opposing counsel with pepper spray and a stun gun at a deposition. When defendants moved for terminating sanctions, the lawyer plaintiff included in his opposition that the trial judge was a “former D.A. currently masquerading as a Superior Court Judge” and was defense counsel’s “pet dog.” He submitted a proposed order for the trial judge’s “rubber stamping.” The trial court granted terminating sanctions. The Court of Appeal noted that courts have inherent authority to dismiss a case as a sanction, but such authority should be exercised only in extreme situations, “such as where the conduct was clear and deliberate and no lesser sanction would remedy the situation.” The appeals court affirmed the grant of terminating sanctions, stating: “Here the practice of law became more than stressful; it was dangerous.” (Crawford v. JPMorgan Chase Bank, N.A. (Cal. App. Second Dist., Div. 6; December 9, 2015) 242 Cal.App.4th 1265 [195 Cal.Rptr.3d 868].)

Short sales have become a popular alternative for people struggling to keep up with their mortgage payments. But what is a short sale, and do you qualify? What is a Short Sale? A short sale is a sale of real estate in which the proceeds from the sale are insufficient to cover … END_OF_DOCUMENT_TOKEN_TO_BE_REPLACED

We often associate going to see an attorney with legal problems, but an attorney can help you in many different aspects of business. Whether you are just starting your business or have been in business for many years, an experienced business attorney can be an asset, providing … END_OF_DOCUMENT_TOKEN_TO_BE_REPLACED