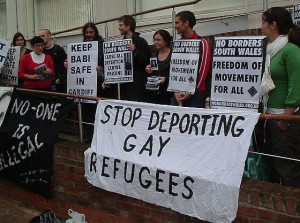 A man brought a petition for review of an immigration board’s denial of asylum to the Ninth Circuit Court of Appeals under the Convention Against Torture [CAT] based on his sexual orientation and HIV-positive status. The man testified he was raped and otherwise sexually abused by his uncle, his cousins and a neighbor, and that his abusers referred to him using homophobic slurs, telling him they were abusing him because he was gay. He said his abusers punched and beat him, and threatened to hurt him and his grandmother if he told anyone about the abuse. The man never reported the abuse to Mexican police because friends had told him the police would laugh at him and tell him he deserved the abuse he received. The majority opinion of the appeals court found the immigration board’s determination the man failed to establish that the Mexican government was unwilling or unable to protect him, where he did not report the abuse he suffered to authorities. The dissenting justice stated: “Bringas-Rodriguez, like most abused children, did not report to the police the sexual abuse he suffered. Thus, when seeking aslyum, Bringas-Rodriguez had to rely on other evidence of the Mexican government’s inability or unwillingness to protect him. He provided 2009 and 2010 country reports describing police indifference to, and participation in, discrimination and violence against homosexuals. He also testified that his gay friends told him that when they reported to the Mexican police in his home state of Veracruz similar abuse they had suffered, the police laughed in their faces and told them that they deserved the abuse they were receiving. That should be enough.” (Bringas-Rodriguez v. Lynch (Ninth Cir.; November 19, 2015) 805 F.3d 1171.)

For years you diligently save up to buy your first house. After months of searching through listings, you finally find your dream home and make an offer that gets accepted. Just days before closing, everything goes smoothly until you get an email from your "real estate agent" … END_OF_DOCUMENT_TOKEN_TO_BE_REPLACED

According to the Bureau of Transportation, around 13 car crashes occur every minute in the U.S. When an accident happens it's important to know what steps to take and how to protect your rights. The most important step you can take is to hire a qualified car accident attorney … END_OF_DOCUMENT_TOKEN_TO_BE_REPLACED