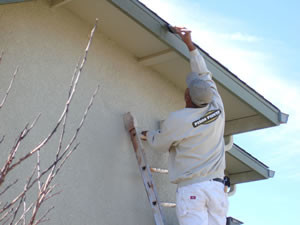 Plaintiff was employed by a painting contractor which contracted with homeowners to paint the interior of their home. An hour into the job, plaintiff was injured when he fell 12-15 feet from a ladder provided by the contractor.  It turns out that the painting contractor had informed the State he had no employees and was exempted from the requirement of having workers’ compensation coverage. Because the contractor had no workers’ compensation coverage, the contractor’s license was immediately and automatically suspended. Plaintiff thereupon sued the homeowners for negligence and premises liability based on allegations his fellow painters were negligent. The trial court granted the summary judgment motion of the homeowners. Without having to deal with the issue of whether or not the homeowners were potentially liable, the Court of Appeal assumed they were, but affirmed nonetheless, noting that plaintiff testified in his deposition that the ladder from which he fell didn’t appear to have anything wrong with it, and that he did not know why he fell. The appellate court stated: “There is no evidence showing that anyone, whether the [homeowners] or [plaintiff’s] fellow painters, did anything or failed to do anything that caused [plaintiff] to fall off the ladder. No evidence suggests the existence of any hazardous condition at the [homeowner’s] residence, much less one that had any causal connection to the fall. In light of the absence of a triable issue of material fact as to either of [plaintiff’s] claims, the trial court did not err by granting the [homeowners’] motion for summary judgment.” (Vebr v. Culp (Cal. App. Fourth Dist., Div. 3; October 28, 2015) 241 Cal.App.4th 1044 [80 Cal. Comp. Cases 1311].)

Mark A. Mellor, Esq. was featured on ABC 10News San Diego, where several homeowners claim that a well-known solar company suddenly closed their doors and took off with their payments. "Attorney Mark Mellor specializes in construction law. He tells homeowners to check all … END_OF_DOCUMENT_TOKEN_TO_BE_REPLACED

In nearly any kind of enterprise, a business attorney is critically important in making sure that business transactions are conducted in appropriate ways. In general, business attorneys help their clients with everything involved in operationally running a business – from payroll … END_OF_DOCUMENT_TOKEN_TO_BE_REPLACED