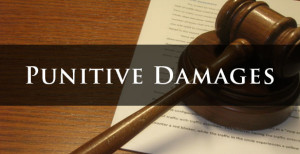 Plaintiffs are the survivors and the estate of a decedent who suffered from mesothelioma as a result of his exposure to asbestos. The jury awarded various amounts to the survivors and the estate, and also awarded the estate $32,500,000 in punitive damages. With regard to the testimony about defendant Borg-Warner Morse TEC INC’s [BWMT] financial condition, the trial judge limited plaintiffs’ expert testimony to 30 minutes on direct, 30 minutes on cross and 10 minutes on rebuttal. Plaintiffs’ expert, Robert Johnson, stated that he evaluated all the factors that were available to him through publicly available information for BWMT. That publicly available information consisted solely of BorgWarner, Inc.’s [not BWMT], audited financial statements from 2009-2012 and an excerpt from an audited financial statement that documented the revenue and earnings of BWMT before interest and taxes in 2002. On cross-examination, Johnson conceded that his opinion was constrained by the dearth of publicly available information on BWMT and was limited to an estimation – he characterized it as an “understatement” – of BWMT’s revenue. He acknowledged that revenue, or the amount of money coming into a corporation, “doesn’t tell you anything about” profit or loss, cash on hand, debts for the corporation, or bank credits. Johnson further conceded that he had no information about BWMT’s net worth, market capitalization, research and development, stock buybacks, accounting fees, or CEO compensation. Johnson acknowledged that BWMT was one of “many” subsidiaries of BorgWarner, Inc. Johnson explained that nothing in the financial documents . . . specifically broke out the profitability of BWMT. He therefore looked at the most recent profitability figures he could find, the ones from 2002, and concluded that the figures “probably stayed the same” because BorgWarner, Inc. had not told its shareholders that profitability declined. The Court of Appeal noted: “As discussed above, the only evidence of BWMT’s financial condition was the somewhat muddled testimony of plaintiffs’ expert, Robert Johnson.” The appellate court further stated: “The problem is that this evidence was, at best, pertinent to only half of BWMT’s balance sheet and therefore was not, standing alone, meaningful evidence of BWMT’s financial condition.” The Court of Appeal reversed the award of punitive damages “because plaintiffs’ limited evidence of BMWT’s financial condition was not sufficient to sustain an award of punitive damages.” (Soto v. BorgWarner Morse TEC Inc. (Cal. App. Second Dist. Div. 4; August 5, 2015) 239 Cal.App.4th 165 [191 Cal.Rptr.3d 263].)

Many unfortunate circumstances can lead to someone not being financially stable. Finding yourself in an unstable financial situation while paying back loans can be especially difficult. While you may find your next steps elusive and overwhelming, there are some options. One … END_OF_DOCUMENT_TOKEN_TO_BE_REPLACED

A contract is a written agreement to help define the relationship between a business and an individual. Disputes can occur when one party breaches the terms of the contract, or if there is a disagreement regarding how it is worded.  Disputes with company contracts, non-compete … END_OF_DOCUMENT_TOKEN_TO_BE_REPLACED

Defective construction is a deficiency in a building or other structure type. Construction defects can delay projects and cause extensive injuries. Instances of defective construction occur because of poor design, low-quality materials, and poor workmanship. If you believe you … END_OF_DOCUMENT_TOKEN_TO_BE_REPLACED