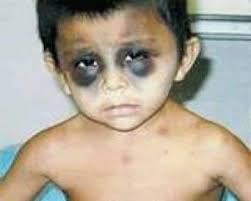 A 3-year-old boy, who was being cared for by his mother’s boyfriend, went to school with a black eye, belt marks on his back and stomach, and bruises all over his body. The 3-year-old told school teachers the boyfriend inflicted the injuries. When authorities went to the home, the boy’s 18-month-old sister had two black eyes, a swollen hand, and a large burn on her cheek, and two pigtails had been ripped out at the roots of her hair. A court determined the 3-year-old was not competent to testify, but an Ohio court rule permitted the admission of reliable hearsay by child abuse victims. The trial court ruled the 3-year-old’s statements to his teachers bore sufficient guarantees of trustworthiness to be admitted as evidence. The boyfriend, by then the defendant, moved to exclude the 3-year-old’s statements to his teachers under the Confrontation Clause of the Sixth Amendment [“In all criminal prosecutions, the accused shall enjoy the right . . . to be confronted with the witnesses against him.”]. Concluding the statements were not testimonial, they were admitted and the defendant was found guilty and sentenced to 28 years in prison. The U.S. Supreme Court was called upon to decide whether statements made to persons other than law enforcement officers are subject to the Confrontation Clause.  The high court ruled: “[The 3-year-old’s] statements occurred in the context of an ongoing emergency involving suspected child abuse. When [his] teachers noticed his injuries, they rightly became worried that the 3-year-old was the victim of serious violence. . . [his] age fortifies our conclusion that the statements in question were not testimonial.” (Ohio v. Clark (U.S. Sup. Ct.; June 18, 2015) ___U.S.___ [135 S.Ct. 2173, 192 L.Ed.2d 306].)

For years you diligently save up to buy your first house. After months of searching through listings, you finally find your dream home and make an offer that gets accepted. Just days before closing, everything goes smoothly until you get an email from your "real estate agent" … END_OF_DOCUMENT_TOKEN_TO_BE_REPLACED

According to the Bureau of Transportation, around 13 car crashes occur every minute in the U.S. When an accident happens it's important to know what steps to take and how to protect your rights. The most important step you can take is to hire a qualified car accident attorney … END_OF_DOCUMENT_TOKEN_TO_BE_REPLACED