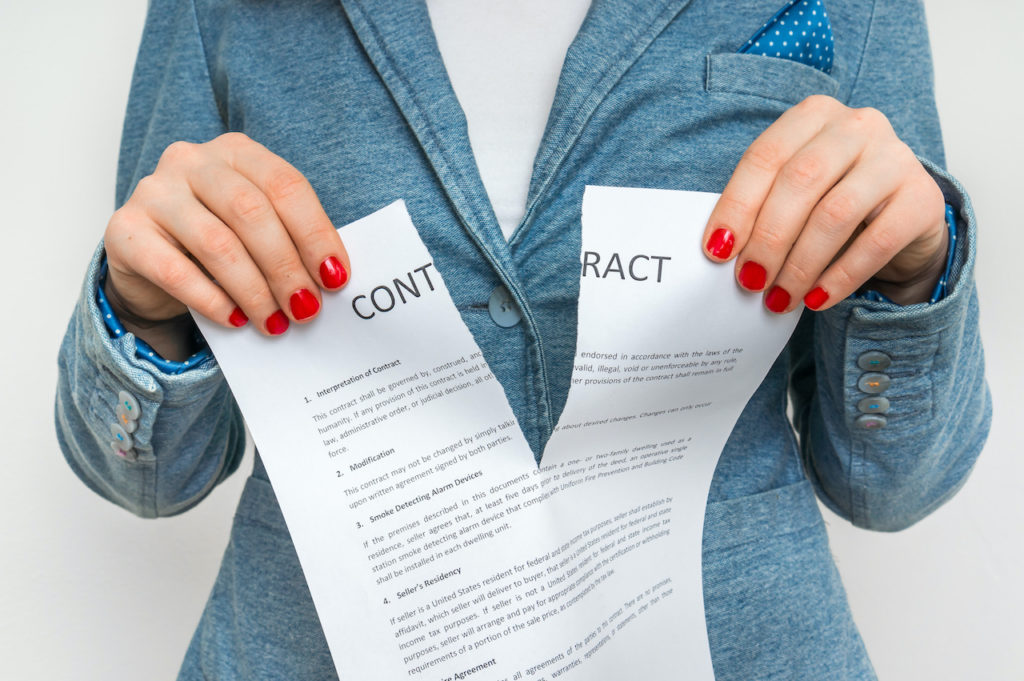 A contract is a legally binding agreement between two parties. Contracts are common, and often necessary, for agreements between an employer and an employee, a contractor and subcontractors, a realtor and home purchaser, a tenant and landlord, or numerous other combinations of individuals.

A breach in a contract can be defined as a failure to fulfill any of the agreements and obligations included in any part of the contract. This includes the failure to perform in a manner that meets the expected standards of the industry or the requirements of any express or implied warranty.

There are some common factors that can muddy the definition of a breach of contract in specific cases or even nullify the agreement. Here are some things to watch out for:

It’s impossible for contracts to cover every single possible situation that may arise relating to an agreement. For example, landlords can include a variety of clauses relating to the activities a tenant is allowed or not allowed to do on the premises, but it’s nearly impossible to create a comprehensive list. Therefore, situations may arise that are not defined within the contract.

For example, in the case of a property rental, a potential breach of contract could occur when a resident wishes to renovate the property by painting the walls. However, if there is nothing clearly stated in their lease agreement preventing this action or unapproved modifications in general, the landlord would not have legal ground to pursue a breach of contract.

The Language Is Vague

When the language within a contract is vague or ambiguous, it can reasonably be subject to more than one interpretation of the terms. Unclear language can sometimes even result in the parties’ original intentions being questioned. This ambiguity can cause a specific word, term, phrase, or legal definition to be unclear and, therefore, unenforceable.

Contracts with vague or ambiguous terms can sometimes be resolved by discussing the intent of the contract with each party. If this is not the case, it may be necessary to have the agreement reviewed by a legal professional in court to resolve the issues within the contract to ensure clarity for both parties.

An example of vague language could be when the definition of a word is not clearly defined within the contract, such as a dollar amount being mentioned without clearly defining it as an amount in US, Canadian, or Australian dollars.

Some reasonable conjecture could be made here, if the contract is between persons in one specific location. However, if such an ambiguity were to occur in an international agreement or a situation where the currency’s country could be questioned, this could lead to a serious dispute.

A very thorough contract will define exactly what constitutes a breach instead of just leaving the parties involved to assume based on the responsibilities outlined. This definition will include the amount of time allowed before the contract is considered to be broken in circumstances involving parties carrying out a responsibility or payment, specific actions that will cause the contract to become void, and punitive actions that can and will be taken should either party break the contract.

However, when a breach is not explicitly defined within the contract, legal parties will generally assume a breach of contract to be a failure of either party to comply. This can, however, still be difficult to determine when specific deadlines, time limits, or circumstances are not outlined in the contract.

When a contract imposes unreasonable limitations or undue burden on one or more parties, the contract is not legally enforceable. A contract is similarly unenforceable if it requires illegal activity.

What Can I Do if a Contract Has Been Breached?

The best way to avoid a situation in which you are either pursuing damages from a party who has breached a contract with you or where you are being accused of breaking contract is to ensure that your contract is clear and thorough, legally enforceable, and defines both what a breach consists of and how it will be remedied.

But if you are involved in a dispute over a breach of contract, one or more parties might need to seek to ensure the contract is enforced or to try to recover financial losses caused by the breach. Informal measures can be put in place to resolve the issue, in accordance with the procedures outlined within the contract: parties can try to work the problem out themselves, or even attempt mediation to resolve the issue.

However, for those that have been named within a breach of contract lawsuit, or for those who believe that another party has failed to honor contractual obligations, pursuing legal action may be the best course of action. It’s therefore advisable to consult a reputable and experienced lawyer specializing in this area to help to decide your best options and review your contract for potential weaknesses or terms that could work in your favor.

The Mellor Law Firm can provide you with a contract dispute attorney experienced in the art of mediation and negotiation. We’ve worked with businesses, employers, employees, real estate agents, homeowners, and construction companies to ensure that contracts are enforced and breaches are remedied, and we’ll provide you with that same excellent service and knowledge that will help your case be successful.

Did you know that on average, 95% of lawsuits are settled before they go to trial? With that statistic in mind, hiring a personal injury lawyer to handle your claim can ensure that you're getting the amount you deserve from your claim, regardless of the stage at which you're … END_OF_DOCUMENT_TOKEN_TO_BE_REPLACED

Landlord-tenant law can be complex, and it's a constantly evolving area of law. To ensure that both landlords and tenants are aware of their rights and responsibilities, it's important for them to understand the basics of landlord-tenant law in California. Having a Landlord or … END_OF_DOCUMENT_TOKEN_TO_BE_REPLACED

Homeowner construction flaws and unforeseen shortcomings can quickly become complex and difficult to manage. With the amount of work involved in the construction process, there's a high potential for errors to occur at any stage. If something goes wrong, it can be hard to know … END_OF_DOCUMENT_TOKEN_TO_BE_REPLACED