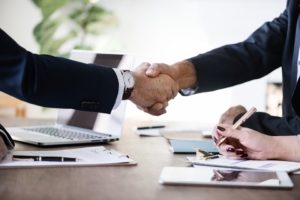 Whether you are receiving payment for goods and services that you provide, or you are paying someone else to supply you with goods and services, there is a contract involved. Sometimes the contract is verbal, and other times it is written and signed by the parties included in the transaction. In certain situations, a contract isn’t explicitly stated, but the subsequent actions of the individuals involved demonstrate that a contract is implied.

There are three elements that establish a legally binding contract. One side makes an offer, the other side accepts, and something of value is exchanged. When one side fails to hold up their end of the bargain without a legally valid excuse, there is a breach of contract. Resolving the issue can be both costly and time-consuming. Fortunately, there are steps you can take to make the process easier, and an attorney that specializes in contract law can help.

There are four situations that constitute breach of contract. Your options for resolving the issue depend of the type of breach. This is a brief overview of the breaches you may encounter:

Once you have determined that a breach of contract occurred, the next step is to validate that the terms of the contract are enforceable. At this point, it is wise to enlist the help of a specialized contract lawyer, such as the experts at The Mellor Law Firm.

Your attorney will examine each aspect of the contract to ensure that it is legally sound. You can prepare for this review by collecting all relevant documentation. For example, proof of contract, evidence of breach of contract, an explanation of which terms you believe were broken and how, and the amount of loss you sustained, if any. Typically, your attorney will recommend drafting and sending a before action breach of contract letter to the other party. In many cases, this is enough to persuade the other party to fulfill the terms of the contract as agreed. If you do not receive a satisfactory response to the letter, it is time to move forward with additional action. Filing a lawsuit to resolve a breach of contract gives you an opportunity to collect compensation for damages you incurred as a result of the issue or to collect the promised goods and services. You may also choose to try mediation or arbitration to resolve the issues without a court hearing. These are the most common methods of resolving financial claims so that you are made whole again :

Of course, in addition to financial losses, you must deal with the outstanding contract itself. Some of the most common remedies you will see include the following,

The Mellor Law Firm as a top choice for expert Contract Dispute Attorneys. You will benefit from a combined 40 years of experience in matters related to business law and contracts. Consultations are available over the phone or in-person. Schedule an appointment online or by phone at 951-221-4330.

Did you know that on average, 95% of lawsuits are settled before they go to trial? With that statistic in mind, hiring a personal injury lawyer to handle your claim can ensure that you're getting the amount you deserve from your claim, regardless of the stage at which you're … END_OF_DOCUMENT_TOKEN_TO_BE_REPLACED

Landlord-tenant law can be complex, and it's a constantly evolving area of law. To ensure that both landlords and tenants are aware of their rights and responsibilities, it's important for them to understand the basics of landlord-tenant law in California. Having a Landlord or … END_OF_DOCUMENT_TOKEN_TO_BE_REPLACED

Homeowner construction flaws and unforeseen shortcomings can quickly become complex and difficult to manage. With the amount of work involved in the construction process, there's a high potential for errors to occur at any stage. If something goes wrong, it can be hard to know … END_OF_DOCUMENT_TOKEN_TO_BE_REPLACED