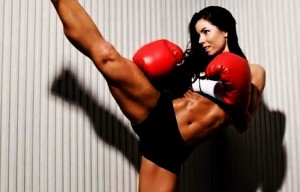 Prior to plaintiff’s participation in a kickboxing class at defendant’s sports club, she signed a one-page agreement which advised that use of the facility naturally involves a risk of injury which she understands and voluntarily accepts. Thereafter, while performing a roundhouse kick, after being instructed on technique, plaintiff injured her knee. In opposition to defendant’s summary judgment motion, plaintiff submitted evidence the instructor caused her knee to snap when he manipulated her knee, he is not a certified kickboxing instructor and he incorrectly instructed her. She also argued the printing on the release was illegible. In her declaration, plaintiff described what the instructor did: “[The instructor] told her to ‘kick around me.’ She attempted to kick around him, and he grabbed her right leg between the ankle and knee. She locked her left knee and planted her foot to keep her balance. [The instructor] said ‘rotate’ in a harsh tone without demonstrating how or in what direction [plaintiff] should rotate. When she rotated her left knee, she felt a pop and the knee gave out.” The trial court granted the motion for summary judgment, ruling there was a valid waiver of liability, the waiver was legible and the action was barred by the doctrine of primary assumption of the risk. In affirming, the appellate court stated the injury falls squarely within the doctrine of primary assumption of the risk.” The court discussed the California Supreme Court’s opinion in Avila v. Citrus Community College District (2006) 38 Cal.4th 148, [41 Cal.Rptr.3d 299, 131 P.3d 383, noting that intentionally throwing at a batter is forbidden by the rules of baseball, but the doctrine of assumption of the risk applies nonetheless because being intentionally thrown at is a fundamental part of the inherent risk of the sport of baseball, and that “It is not the function of tort law to police such conduct.” The appellate court also stated the instructor here did not increase the risks already inherent in the sport. It added there is no argument on appeal the release was invalid other than passing suggestions it was illegible and that gross negligence makes it invalid. But the court said there was no indication of gross negligence here. (Honeycutt v. Meridian Sports Club, LLC (Cal. App. Second Dist., Div. 5; November 6, 2014)  231 Cal.App.4th 251, [179 Cal.Rptr.3d 473].)

Did you know that on average, 95% of lawsuits are settled before they go to trial? With that statistic in mind, hiring a personal injury lawyer to handle your claim can ensure that you're getting the amount you deserve from your claim, regardless of the stage at which you're … END_OF_DOCUMENT_TOKEN_TO_BE_REPLACED

Landlord-tenant law can be complex, and it's a constantly evolving area of law. To ensure that both landlords and tenants are aware of their rights and responsibilities, it's important for them to understand the basics of landlord-tenant law in California. Having a Landlord or … END_OF_DOCUMENT_TOKEN_TO_BE_REPLACED

Homeowner construction flaws and unforeseen shortcomings can quickly become complex and difficult to manage. With the amount of work involved in the construction process, there's a high potential for errors to occur at any stage. If something goes wrong, it can be hard to know … END_OF_DOCUMENT_TOKEN_TO_BE_REPLACED